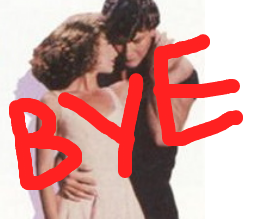 No-one seems to understand that we’ve already had the time of our lives. Presumably egged on by the surprising success of the recent (and admittedly damn good fun) Footloose remake, nothing can stop the Dirty Dancing train from prancing its way out of the station. July 26th, 2013. The date Patrick Swayze rises up from the underworld and kills us all. It’s the only way we’ll learn.

Currently no names are attached to the project, but rumours are rife that – in a spectacularly unimaginative move –Footloose star Kenny Wormald will take on the role of Johnny Castle. Well, if he can make one film about a boy who likes to dance, why not be in ALL THE FILMS about that subject, eh? No potentials are yet lined up to play Baby, the small-town girl who, much like the wind, gets all caught up in the sexy world of sexy sexy dancing, but there’s no doubt that Wormald’s co-star Julianne Hough will be thrown into the mix. Now all we need is the hammer to fall on an invariable Back To The Future re-imagining. It’ll happen. You know it will.