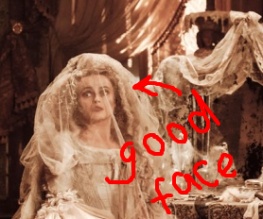 The upcoming film of the Dickens classic Great Expectations has released some images of Helena Bonham Carter as literature’s most famous jilted bride, Miss Havisham.

The film, directed by Mike Newell (The Goblet of Fire), stars Jeremy “War Horse” Irvine as main guy Pip, Ralph Fiennes as escaped convict Magwitch, and Robbie Coltrane as some guy called Mr Jaggers. Goodness, it’s a Hogwarts reunion isn’t it! We reckon Newell, Bonham Carter, Fiennes and Coltrane will sit with each other at lunch, cracking Wingardium Leviosa jokes and glaring at all the other actors as if to say “You weren’t there. You’ll never understand”.

So have a butchers at these (courtesy of the folks at Rope of Silicon): Helena looks pretty much how you would expect. Corset, big hair, rags. Essentially how she dresses for a red carpet event (Ooh! Zing!). Seriously, this does sound like a promising project. Although, the film will be going up against a TV adaptation of the book also coming out in 2012 and starring Gillian Anderson (Havisham) and Ray Winstone (Magwitch).

The question is, who do you think would win in a fight: Gillian Anderson or Helena Bonham Carter? Ralph Fiennes or Ray Winst – oh wait, we think we know the answer to that one. He is the Dark Lord, after all.