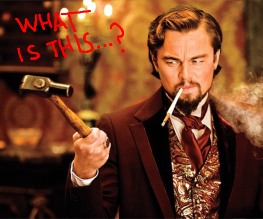 Django Unchained may well have hit the point where you can piece together 90% of the film through trailers and TV spots, but we never fail to get all twitchy and excited when new ones are announced. Today’s glut of Quentin Tarantino goodness gives us an extended look at Leonardo DiCaprio‘s drawling Southern slave-holder as he faces off to Jamie Foxx‘s defiant Django. OH SANTA TARANTINO, YOU ARE TOO GOOD TO US!

Leo just gives us shivers with his oppressive Southern hospitality – an iron fist in a velvet smoking jacket. We also get some idea here of the growing relationship between Django and Christoph Waltz‘s Dr Schultz, a partnership that the second clip released today focuses on.

Oh Jamie Foxx, we love the idea of Django getting dirty! Waltz’s concerned protection of his valet, and fear for his own life, is a beautiful foil to Foxx’s intense, controlled fury at the abominations he has had to commit at the command of a white man. The more we see of Waltz and Foxx, the more we love the combo. The final clip released gives us a good look at Samuel L. Jackson‘s conniving slave. A character unusual in cinematic depictions of slavery, Jackson’s Stephen is fiercely loyal to his white master, living a life of comparative privilege as a reward for keeping order amongst his fellow slaves.

Whilst Samuel L. Jackson is obviously amazing and truly terrifying, this clip also highlights the exceptional talent of Kerry Washington as Broomhilda. Today’s TV spots have only furthered the Django hype buzzing around Best For Film Towers, reassuring us that aside from the sharp dialogue and all the guns, at the heart of Tarantino’s own unique Christmas movie is solid gold acting.

How excited are you for Django? What do you think of the latest clips? Tell us below.

Previous: Hugh Jackman gets his Walk of Fame Star. FINALLY!
Next: Golden Globes – nominations for 2013 are out!