Golden Globes – nominations for 2013 are out! 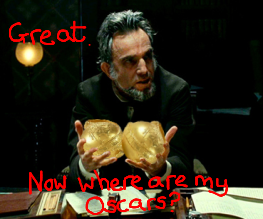 Golden Globes get a lousy reputation, being the little awkward bother of the Academy Awards. The nominations are a good opening for awards season, however, since it suggests how the Oscars might go. A nomination or an award at the Golden Globes is also a nice recognition for films that might be otherwise snubbed at the notoriously elitist Oscars. There are no big surprises here, but there are some big names with a lot of pull competing.

Here’s the list for the Golden Globes 2013 in cinema:

Best Performance by an Actor in a Motion Picture — Drama

Best Performance by an Actress in a Motion Picture — Drama

So there you have it! The Golden Globes really aren’t trying hard to push the envelope in terms of nominations, but it’s comforting to see all the titles we thought we would see.

What do you think will win in the major Golden Globes categories? What films do you think deserved a nomination that isn’t on the list?