Dredd 3D sequel has been cancelled 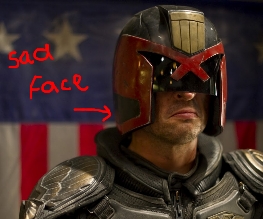 Even though 2012’s Dredd 3D was a hit with comic book lovers and fans of the original Judge Dredd books, the film made a substantial loss. Just not enough people went to see it at the cinema! and the box office takings don’t look too great (it made $36.5 million and had a budget of $45 million). Many have debated as to why the film didn’t make a profit and it has been argued that because it had ‘3D’ right up there in the title this alienated a certain audience. The film entered the home video market at number one and knocked The Dark Knight Rises off the top spot, however, this success still wouldn’t allow the film to gain enough profit to be considered a success.

So, it looks unlikely that the Dredd 3D will be getting a sequel! Adi Shanker, the film’s producer, has talked about this recently, and the possibility of Dredd appearing in a short film:

“It’s because the movie totally bombed & R-rated movies are a tough sell to begin with. But I am working on a Dredd short. If Dredd becomes a cult hit it will be awesome. Last September was a terrible month … Dredd bombed and then Looper became a massive hit a week later!”

Looks like we’ll just have to wait and see whether Dredd graces our screens again.