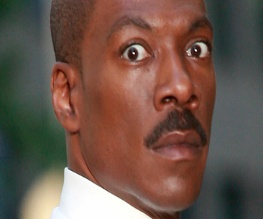 The Hollywood rumour mill has evidently become weirdly efficient. Just two days ago, we heard that Eddie Murphy was merely being considered for the host position at the 2012 Oscars and now suddenly it’s set in stone. Producers Brett Ratner (Rush Hour) and Don Mischer (The Wayne Brady Show, whatever that is.) are falling over themselves about it.

“With his love of movies, history of crafting unforgettable characters” – Norbit, anyone?- “and his iconic performances – especially on stage – I know he will bring excitement, spontaneity and tremendous heart to the show (we) want to produce in February,””

While we have our doubts, it’ll probably be a perfectly fine evening, and the Girl With The Dragon Tattoo remake will probably get Best Picture, and everyone will be annoyed for a minute and then be cool again once Brad Pitt wins Best Actor for Tree of Life. We’ll all go to bed, and the world will keep turning.