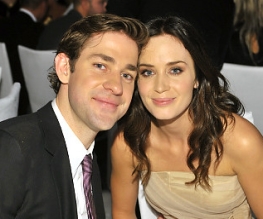 Emily Blunt and John Kransinski have tied the knot in a private ceremony.

The pair married on Saturday at Villa D’este, in Como, Italy.

Emily Blunt, best known for her roles in The Devil Wears Prada and The Young Victoria, was reportedly radiant in a cream, chiffon Marchesa dress.

Amongst guests was George Clooney, who attended the wedding with his girlfriend Elisabetta Canalis. Blunt and Kraskinski were spotted relaxing with the couple on a yacht on Saturday morning, and have also been staying at Clooney’s Lake Como residence since 7th July. Krasinski became friends with Clooney when they starred together in the 2008 film Leatherheads.

The secret wedding follows Megan Fox’s surprise nuptials in Hawaii last week. Can only think our invitations are getting lost in the post…