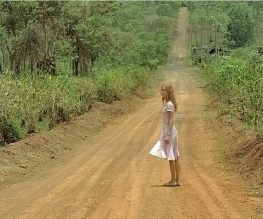 When contemplating how I might rate director Claire Dennis’ latest film, I was hit with an odd conundrum. How could I judge this piece of drama as a ‘film’ in the typical sense of the word, when it deviated so far from any of the conventions that this encompasses? ‘White Material’ appeared to me more as a documentary-style drama, with its bobbing camera footage and understated dialogue.  It gave me the eerie feeling that I was looking in on something that was never intended for my viewing. The fact that the film was in French with English subtitles dwindled into insignificance (much to my relief!), as the script was so secondary to the imagery that I wondered whether anything would have been lost had the words been missing altogether. I came to the conclusion that this was a film to be considered as “Art” rather than entertainment.

We follow the story of Maria Vial (Isabelle Huppert), a French women living in Africa at a time of great civil unrest and racial tension.  She is at once at odds with, but still remains an intrical part of the landscape. The opening images of Maria’s freckle splattered pale skin and auburn hair, pressed against  a dry, baron backdrop, otherwise inhabited by black natives, is immediately striking. Yet we soon see that this self-assured, strident character is quite within her depth, well connected within the community and intent on up keeping her coffee plantation. As the action moves forward, violence spreads across the country and Maria is put under increasing pressure to flee, but an idle son (Nicholas Duvauchelle) and a seemingly deceitful husband (Christopher Lambert) are not enough to break the pride that binds her to the land. An alliance with a dangerous rebel and failure to act against impending threat eventually leads Maria towards a darker fate than she could have imagined.

Hang on, did I doze off in there?

I emerged from the cinema feeling a little dazed and with a ton of unanswered questions. Why was this French family living in Africa in the first place? How exactly had the civil feud begun? Why the heck didn’t Maria just get the hell out of there? After all, it was pretty obvious that things weren’t going to end too rosy. Even the exact location and time setting were difficult to pin down. I consoled myself with the idea that perhaps we weren’t supposed to understand the back story, that the characters’ actions were intentionally evasive because Dennis did not want us to connect or empathize with them.  It seemed that ‘White Material’ was more about capturing a moment, providing a clinical view to Man’s potential for animal violence, than illustrating a personal story.

Throughout my hour and forty minutes of viewing, very little actually happened. Action and speech were kept to a minimum so that the emphasis fell onto imagery. The film was filled with long, still, silent shots of disturbingly provocative images – children sleeping clutching guns and machetes, rows of dead bodies laid face down in the soil, a bleeding ram’s head in basket of red berries. These frames served almost as a motif to punctuate the action, a constant reminder of the unspoken fear that loomed over the characters.

So beautiful, but oh so boring!

Overall, I have never watched a film that was so depressing and so strangely beautiful at the same time! If you opt to see this one, be prepared that it is not gentle entertainment. I (alone with my ‘sharer’ bag of minstrels) was not prepared, and my rating reflects this. I’m sure it would have deserved a higher score had I found it hanging in an art gallery, rather than on a cinema screen. That said, ‘White Material’ has got into my head, I have had a creepy dream about being stalked by a knife wielding child. Was this the desired effect? 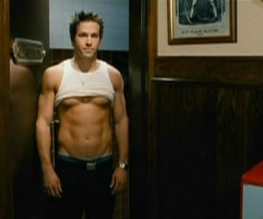