Final Destination 5. There’s literally nothing you can do about it. 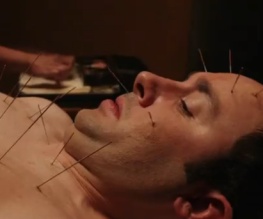 Right, Final Destination, it’s time we had words. It’s been a long time since Roger Ebert rashly complimented your first instalment, it really has – 11 years, to be precise – and a lot has changed. I suppose it was inevitable that you’d churn out a carbon-copy sequel, and since a two-parter is no series at all the threequel can perhaps be forgiven; it was dreadful, obviously, but you did promise it’d be the last.

Then The Final Destination happened. It happened, and there’s no point pointing fingers, not even at whichever rancid motherless git decided to make it in 3D – our only consolation was that in true Saw style, the big, brash, absurdly ‘eye-popping’ instalment was bound to be the last one. I’d nearly forgotten about that scene where the chap’s guts get sucked out of his arse by a pool pump. I was ready to forgive.

But not any more. Not now this has happened:

WE GET IT, FINAL DESTINATION! We totally understand the premise from which you’ve inexplicably managed to wring nearly half a billion dollars, because it hasn’t changed since I was in fucking primary school. So it’s a bridge this time, is it? And there are acupuncture needles and a big surgical laser and a truck full of tar? I don’t care! We don’t care! Nobody gives a shit about Death picking off irritatingly wholesome teens any more!

Hang on, what’s that? If this film is a success then Final Destination 6 and 7 are going to be filmed back-to-back? That’s it, I’m off to find a disaster I can narrowly avoid being involved in before being inevitably struck down by the poorly-plotted hand of Fate.

Previous: Jack Black teaming up with Winterbottom for Bailout
Next: 20th Century Fox to play the Pied Piper