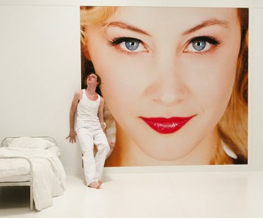 So Brandon Cronenberg – yep, son of David Cronenberg – has his debut at Cannes RIGHT BLOOMING NOW, and his film Antiviral is causing quite the controversy; some people rating it the bees knees and other reckoning its all chat no trousers. If there’s one thing all the reviewers can agree on though, it’s that young Brandon is certainly following in the bruised and bloody footprints of his father – producing a body-shock horror designed to make you squirm. Time for a clip, then?

So, according to the official synopsis:

Cheerful, eh? Those who get a little green in the cheeks around needles should probably look away…

By the sounds of it Antiviral plays it rather heavy handed with the CELEBRITY CULTURE OOH CELEBRITIES ARE BAD AND THAT angle, but certainly gets the job done when attempting to make you be sick. Which is good. Is it?

Will you be jabbing your way into a Antiviral screening? Or a sentence that makes sense? Let us know!

Previous: This week’s releases: the trailers
Next: Secret Catwoman Poster Revealed For The Dark Knight Rises