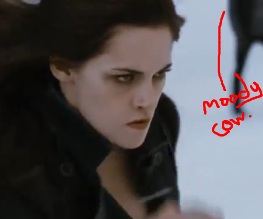 It was bound to happen – last week saw the release of this bloody awful poster, and where a photo of Kristen Stewart looking miserable leads a video can never be far behind. Consequently, we’ve been ‘treated’ to the first teaser trailer for The Twilight Saga: Breaking Dawn – Part 2, which THANK CHRIST is the last of them.

If you’ve taken no interest at all in the franchise like a proper human should, then know this: Kristen Stewart is finally a) married to Robert Pattinson, b) a vampire and c) mum to the preposterously named Renesmee. So far, so schmaltzy. HOWEVER, some meddling bitch has told the glam rock vampires that Antonio Banderas hung out with in Interview that Renesmee is an ‘immortal child’ – that is, a previously-human child who’s been bitten and turned into a vampire rather than a half-human hybrid thing. Immortal children are NOT GOOD because they go mental and kill everything. Therefore, Renesmee must die. (We just had to spend ten minutes on the fucking Twilight wiki to learn all that. Pity us.)

That’s seventy-something seconds of all our lives gone, right there. Why couldn’t they just have said “She’s a monster!” “No she isn’t!” “Fight! Fight! Fight!” and had done with it? God, this is going to be awful.

Why do people like Twilight? We genuinely want to know.