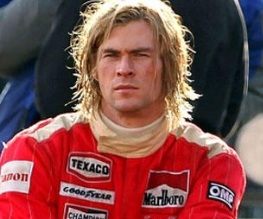 “Death is something that happens to other people” Chris Hemsworth mutters with an English accent in the opening moments of the Rush trailer, and the high-octane drama ramps up from there. Rush has something for everyone. For the petrol-heads there’s quick shots of cars moving very very fast, some while going up in flames; and for everyone else there’s drama, romance and a fleeting glimpse of Hemsworth’s naked torso. Fingers crossed that this won’t just be Thor on wheels. Watch the trailer right this minute:

Rush, directed by Ron Howard, is a biopic of racers James Hunt (Hemsworth) and Niki Lauda (Daniel Brühl) and their feud which spanned across the 70s, culminating in a furious World Championship showdown in Fuji. Olivia Wilde is also in it as someone for Hunt to have sex with. Well not quite as throwaway as that – she plays Hunt’s wife Suzy Miller.

Hemsworth is an extremely capable actor despite some of his role choices (Snow White and the Huntsman anyone?), and from the looks of Rush he’s looking to showcase his versatility. Hunt was known for being a charismatic lethario, so it’ll interesting to see if the Thor star can pull it off. Quite frankly, we’d be more than happy for Chris to pop in to BFF Towers and show us his versatility any day of the week.

Will you be watching Rush when it comes out? Let us know below!

Previous: Bradley Cooper steps into Jane Got a Gun
Next: Twilight star Kellan Lutz to star as Hercules 3D