Former U.S. President faces The Hangover of his life 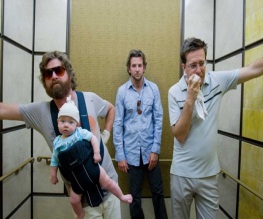 It’s official, everybody wants to be hungover. After Mel Gibson’s cameo was dropped from the sequel following negative press, and the star left to console himself with Jodie Foster’s Beaver, a string of colourful celebrities have started lining up to cameo in this sequel to 2009’s hit comedy. In case you’ve stumbled upon this article, completely against your will, we are going to give you a paragraph’s grace and ask that you please take your spoilerphobia elsewhere.

With Liam Neeson set to appear as a menacing tattoo artist (say no more), Paul Giamatti cameoing in an undisclosed role and Mike Tyson stalking Zach Galifianakis, Bradley Cooper, Ed Helms and Justin Bartha to Thailand, news has reached us from People.com that Bill Clinton has also joined the shoot – where he has reportedly filmed his scenes as a patron of clean energy, giving a speech about climate change in the nation’s capital.

Since Tyson first broke into a truly jaw-dropping rendition of Phil Collins’ In the Air Tonight, it appears that Todd Philips has decided that a celebrity mid-life crisis is as intrinsic to a Hangover movie as a snow capped Hogwarts is to Harry Potter and a chronic absence of jokes is to a Judd Apatow movie.

In addition to this casting news, TMZ has leaked photos from the film’s Thai set. They are included below in all their spoilerific glory. The first image shows a marked Stu as he emulates Mike Tyson’s trademark face-tattoo while the second image shows a shaven Alan as he signs up to become a monk.

While the original was undoubtedly entertaining, Philips’ abysmal Due Date has shown that he can sometimes mistake randomness for comedy and unsympathetic behaviour for characterisation. I only hope that The Hangover 2 keeps the focus on the winning ensemble without becoming the Zach Galifianakis show.

The Hangover 2 will cameo at your local cineplex next May.

Previous: Carey Mulligan for The Great Gatsby?
Next: Colin Farrell to play lead in Total Recall?