Fry and Laurie to reunite for The Canterville Ghost 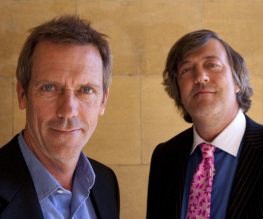 National treasure Stephen Fry and transatlantic acting superhero Hugh Laurie are to reunite for a new animated film, it was announced today.

Fry took to Twitter to announce that he would be collaborating with his long-term colleague Laurie on a new version of Oscar Wilde’s much-adapted short story The Canterville Ghost.

For those who’s never read The Canterville Ghost (we like to call them ‘philistines’), the story follows the misadventures of a ghost whose ancestral home is bought by a nouveau riche family of Americans – none of whom believe in the supernatural. The spectral Sir Simon is quick to assert himself, but to his horror the practical Otis family has no difficulty adjusting to their houseguest. All Sir Simon’s ghostly wiles are useless in the face of folk so inured to horror as to offer him lubricant for his clanking chains and find an industrial spot remover for the gruesome bloodstains in the drawing room…

…and here’s a poster for the new production. Click to enlarge, as usual. Best For Film’s guess is either that Fry will voice Sir Simon whilst the appropriately Americanised Hugh Laurie takes Mr Otis, or that Laurie will voice the ghost and Fry will narrate.

Actor, writer and broadcaster Fry, who has been collaborating with Laurie since the early eighties, memorably played Wilde in the 1999 film of that name. He has also written accompaniments for a number of Wilde’s short stories, published three years ago as Stephen Fry presents Oscar Wilde’s Stories for All Ages. We’re sorry to say that we didn’t have to look that title up.

Is this the best news you’ve had all day? It bloody ought to be.

Previous: Ezra Miller to star in Madame Bovary
Next: Idris Elba to return to Asgard for Thor 2