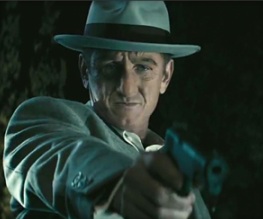 Gangster Squad. Say it back to yourself. Gangster Squad. It doesn’t sound like a film that actually exists, does it? Leslie Nielsen would be proud. One ticket to Gangster Squad, please. It sounds like something a character from The Sims might watch, not a banner film starring a brace of acclaimed actors. Gangster Squad definitely does exist, though, very loudly insisting on its actuality in this new TV spot in which gunshots handily take the place of those pesky mouth noises once favoured by actors.

So. Gangster Squad, as it insists on being called, features a lot of action. Obviously trailers are cut – TV ads even more so – to showcase the more explosive moments of a film, but we though Gangster Squad might be different. L.A. Confidential remains the high watermark of neo-noir throwbacks, but this looks more like Lee Tamahori‘s little-loved dud Mulholland Falls, and not just because Nick Nolte is growling about.

Previous: Andy Samberg hosting the Indie Spirit Awards
Next: The Hobbit gets one last (we hope) clip before general release