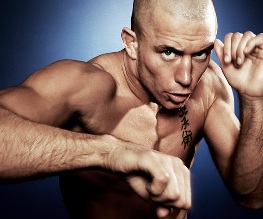 UFC champ Georges St-Pierre has been cast as Batroc the Leaper in Captain America: The Winter Soldier. The thing about Batroc is that he’s quite good at jumping considerably high for a human being, so choosing St-Pierre to fill the role SOUNDS like a stroke of genius. This kicky, punchy character is perfect for the athlete, who specialises in savate, a kicky-punchy form of foot boxing.

Here’s some Batroc background. He first appeared in the Marvel universe in 1996 and served in the French Foreign Legion. After leaving the Legion he sold his very specific skill set as a thief to the highest bidder (how very Black Widow of him), which brought Batroc into conflict with Captain America on more than one occasion.

Cap already has to deal with his dead best pal (Sebastian Stan) coming back to life as the Winter Soldier, and a brand new nemesis by the name of Crossbones (Frank Grillo), so one more villain won’t hurt, right? Just remember, Spiderman 3 had a few villains, and turned out be a pretty poor film. Captain America: The Winter Soldier is slated for release on April 4, 2014 and stars Chris Evans, Samuel L. Jackson, Emily VanCamp, Cobie Smulders and Anthony Mackie.

Is Georges St-Pierre a good bit of casting? Let us know below!