Kick-Ass 2 gets a brand-new trailer 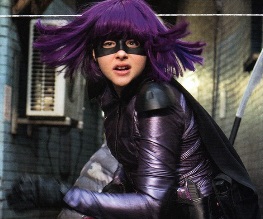 As we’re all well aware by now, Kick-Ass and Hit Girl are back for more nut-smashing and ass-kicking action in the upcoming Kick-Ass 2, and they’ve got a brand-new international trailer to prove it.

But, this time around, the emphasis is firmly on Chloë Moretz. There’s a lot of shots which show Mindy Macready grappling with her identity as a “normal” teenager, a few lip wobbling moments which suggest a wealth of inner turmoil under the surface, quite a bit of purple and a LOT of looking into mirrors and seeing herself as costume-clad superhero Hit-Girl.

Can Macready ever embrace her destiny as a superhero? You bet your soft kickable posterior she can!

What did we tell you, eh?

But, rather than pointing the camera squarely at the emotional journey of a young girl in the midst of an identity crisis, the trailer also offers us a sneak-peek at new character Colonel Stars and Stripes aka Jim Carrey. According to the sequel’s plot synopsis, Kick-Ass (Aaron Taylor Johnson) joins forces with the Colonel to battle Red Mist, the character who betrayed him in the first film.

Are you excited for Kick-Ass 2? YEAH YOU ARE!