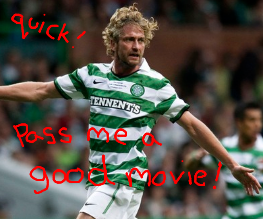 Gerard Butler hasn’t had a great career since his unrivaled manliness cut its way into our hearts in 300 way back in the ancient times of 2006. Apart from providing the voice of the Chieftain in How to Train Your Dragon (in which he did an excellent job), and nailing his role in Coriolanus, his film choices have not been great. Overcoming the odds, Gerard Butler is BACK with a film based on true events, Dynamo.

Dynamo is adaptation of the book Dynamo: Defending the Honor of Kiev, which tells the remarkable and true story of how the Nazis attempted to crush the resistance of the occupied Ukraine by beating them in a game of football. Unfortunately for the Nazi’s Super Aryans United team, the “Death Match”, as it came to be known, had the opposite effect, inspiring the people of Ukraine to rise up against their invaders.

Gerard Butler will play Nikolai Trusevich, the Ukrainian team captain and goal keeper. Hopefully the film will actually tap into Gerard Butler’s untapped and mythic talent, rather than what happened in The Ugly Truth and The Bounty Hunter (regarded as the Worst Film of All Time by everyone, and don’t you dare deny it). One suspects that Gerard Butler’s agent might be a nihilist. Or an anarchist.

Sounds good so far? Here comes the rub: The script was written by Eli Richbourg, previously only known for his producer role in such Joel Schumacher classics as Phone Booth (passable) and The Number 23 (we take back any negative comments about The Bounty Hunter – this wins the prestigious Worst Film of All Time award). This is yet another big gamble by Gerard Butler. Let’s hope it pays off.

Gerard Butler: Can he kick a remarkable goal, or will he offside himself yet again? Is… is that how you use those terms?