Hathaway and Nolan, together again 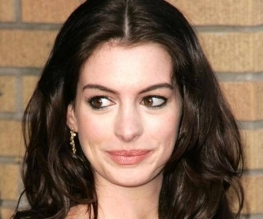 With an Oscar now firmly under her belt, Anne Hathaway is probably being inundated with juicy roles. It seems however that this actress prefers to hold on to the tried and true, with reports now predicting that she will join Christopher Nolan‘s new sci-fi space adventure, Interstellar. Her experience as Selena Kyle (a.k.a Catwoman) in Nolan’s previous venture, The Dark Knight Rises, must have been a particularly good one since all signs point to the ink on the deal being imminent.

Other than the casting of Matthew McConaughey not much is known about the project. The script has been under a lengthy development by younger brother, Jonathan, before Christopher pitched in with a rewrite. There is talk of it being a complex look at time travel and alternate dimensions developed upon scientific theories of Kip Thorne, a theoretical, gravitational and astrophysicist at the California Institute of Technology. The story will revolve around an so far unknown group of space explorers who travel through a wormhole.

Interstellar is set to be released on the 7th of November, 2014. If his Midas touch holds true this might be another BFF favourite in the making.

Who else would you like to see under Nolan’s directorial control? Let us know here!