Have YOU Heard Of The Wicker Tree? 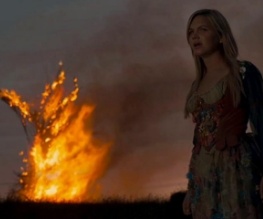 So, like, you know The Wicker Man is an actual film? Apparently it has a sequel. Called The Wicker Tree. It has Christopher Lee in it and everything, taking on the all-important role of ‘Old Man’.

Okay. Let’s not panic. So what if we missed an entire film in the happening? The point is, we know it’s coming out on DVD this April and there’s plenty of time to swot up on the complex storyline before then.

Beth (Brittania Nicol)and Steve (Henry Garrett), two young fresh-faced Christians with a Bible to preach about, have left Texas to spread the word of the Good Book throughout Scotland. As you do. At first, the Scottish don’t really like them that much but, when they stumble upon the small town of Tressock, the border fiefdom of Sir Lachlan Morrison, they are welcomed in with open arms. “Isn’t it lovely that people want to hear more about Jesus?” they think to themselves.

Idiots. The minute they spotted Christopher Lee, famed for his cinematic double-crossing antics, they should have known something dodgy was afoot. Look what the bastard did to Gandalf, for crying out loud!

Okay, in all seriousness, The Wicker Tree has a lot of potential. It was directed and written by Robin Hardy, the man behind the ORIGINAL Wicker Man film (read: not the Nicolas Cage version) and it’s been getting some pretty sound reviews.

Then again… there’s something odd about a guy who writes a comedy-satire-horror-sequel some forty years after the original.

Especially when he claims it’s neither a sequel or a remake of the original film. It just happens to be set in the same place and follow the same story then, does it Robin? You crazy shrew…

Will you be watching The Wicker Man when it comes out on April 24th? Why?