I Am Number Four stills released 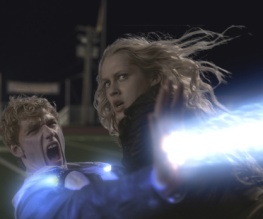 Even given the inclusion of Alex Pettyfer, the actor most likely to take over Mannequin Skywalker’s position as most wooden action star in world, we think I Am Number Four still has potential to be more than samey sci-fi nonsense (see our 20 films to see in 2011 blog for fanboying). So it is perhaps unsurprising that the new stills which Dreamworks released today have got our hearts racing a little bit.

The stills show Number Four (Pettyfer) rocking his alien socks off with what seems to be the Iron Man equivalent of last-generation Spidey’s organic webslingers, as well as Number Six (Teresa Palmer) with a shiny gun and Quinn from Glee looking attractively dim. It’s all good. What do you think of this glittery nonsense? Let us know below!

Previous: Abraham Lincoln: Vampire Hunter gets its lead
Next: Decision Before Dawn