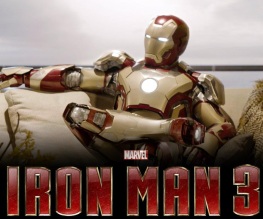 “It’s really fun, dude” is how leading man Robert Downey Jr describes the experience of filming the action sequences in the upcoming Iron Man 3. In an interview with Entertainment Weekly, RDJ reveals that Iron Man 3 will contain a particularly difficult situation for Tony Stark involving only the glove and the boot of the Iron Man suit, and a great load of Bad Guys who want to take him down, for one reason or another. Fans are to be treated to “one big, extended challenge of physics” as Phase Two of Marvel’s superheroes begins to hit cinemas this year.

Downey Jr also reveals that there will be more of Don Cheadle’s Rhodes in the new film, with the character expected to take up a leading role. “There’s a lot more fun to be had with Don because he’s really good with hardware and he’s a martial artist” explains RDJ, which is very handy. Apparently we’ll be getting “a lot more fun and a lot more depth” from this character, which is terrific really.

Directed by Shane Black and co-starring Ben Kingsley, Guy Pearce and Gwyneth Paltrow, Iron Man 3 opens on the UK on 3rd May 2013. If any more tit-bits become available, we’ll be sure to let you know. Robert Downey Jr’s interview about Iron Man 3 can be found on the EW website.

If you had to choose one weapon with which to fight off a bunch off bad people out to get you for some reason, would you pick the hand or the foot of the Iron Man suit? LET US KNOW