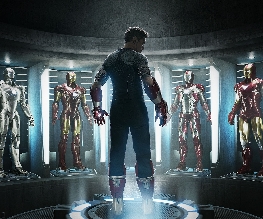 Here at BFF we pride ourselves on our unfailing enthusiasm for the lovely Robert Downey Jr and his many suits. Yes, we are more than a little bit excited about the impending release of Iron Man 3 and have been gratefully consuming every tiny piece of information they have released so far. The newest exciting hint of what is to come is Advancing the Tech, the new behind the scenes feature, which is both informative and revealing. Director Shane Black states that at there are 42 suits at the beginning of the film (which implies that there are more than that by the end!), and takes us through them from Mk 1 (which resembles the tin man from the Wizard of Oz) to Mk 42, which Tony Spark introduces as the other suits as their “bouncing, badass baby brother”.

Number 42 is by far the BEST SUPERHERO ARMOUR WE HAVE EVER SEEN, Batman looks well silly in comparison. It has implants which allows Stark to call parts of the suit USING ONLY HIS MIND so that they effortlessly fly across the room and mold themselves around his body. It’s still solid and sturdy enough to protect him from bullets but flexible enough so that he can fling it across the room and ON TO SOMEONE ELSE. This is illustrated beautifully with a clip from the film showing Pepper, dressed in the suit, saving Tony from a falling building. Downey Jr says that Iron Man 3 has the best third act of all the films – and we are starting to suspect this might be true as at the end THERE’S A WHOLE BUNCH OF IRON MEN! LIKE, LOADS OF THEM! Now that’s what we call back up.

However, reportedly Downey Jr is slightly less excited about the third installment than we are. Speaking to GQ Magazine recently he strongly hinted that he may end his stint as Iron Man, even though it made him an A list superstar in his 40s. He said he would find it boring if it carried on too long, and commented that his contract had finished. He also implied he may be getting a tad old for such athletic work, after he hurt his ankle after filming: “It got me thinking about how big the message from your cosmic sponsor needs to be before you pick it up,” said Downey Jr. “How many genre movies can I do? How many follow-ups to a successful follow-up are actually fun?”

We find the follows up fun, Robert. We do.

Previous: Fantastic Four reboot will start filming in June
Next: Will Smith comes into Focus