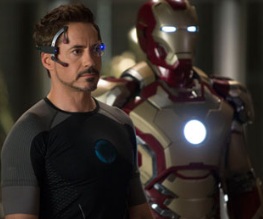 The latest in what will most likely be a lot of TV spots for Iron Man 3 aired during the Kids’ Choice Awards, and the film doesn’t scrimp on the fancy Tony Stark toys. Stark shows off a new method of putting his metal suit on in the brief clip, by flinging his arms out and commanding his armour to come to him. Who else but Stark would BACK FLIP to get dressed?

An impressed Pepper Potts pops up in the clip, gasping a breathy “wow” at her man’s antics. Quite frankly, that’s what we’re all thinking by this point. As if that wasn’t cool enough, we are treated to another glimpse of the entire Iron Man suit roster flying in to save the day. “That’s awesome!” says Don Cheadle‘s Rhodey, best mate of Tony Stark. It all does look very awesome, but in case that wasn’t quite the level of awesome you were hoping for, Stark then leaps from the top of a vertiginous building and is encased by his trusty iron suit.

Impressed by the latest trailer? Let us know what you think!