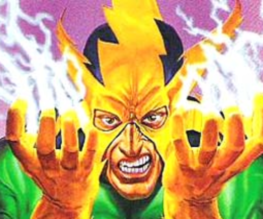 The Amazing Spider-Man 2 is currently trying to lock-in Jamie Foxx for the part of the sequel’s Big Bad, Electro. The Amazing Spider-Man, despite being a cynical attempt on the part of Sony to screw Marvel out of the rights to Spider-Man films, was acceptable (in that it wasn’t a train wreck), but its biggest flaw was the rather slimy antagonist, Lizard, who resembled the goombas from the Super Mario Bros. movie.

The addition of Jamie Foxx in all his charming masculine glory would be a great catch for the producers of The Amazing Spider-Man 2. His star is shining very brightly at the moment, with the imminent Django Unchained (which we’ve not mentioned on this website whatsoever) and White House Down, which looks like the greatest film ever.

The classic Spider-Man antagonist Jamie Foxx might play is a little underwhelming. Electro zaps stuff (like the Emperor from Star Wars) and wears a ridiculous outfit that will definitely have to be redesigned before Jamie Foxx even thinks about putting it on. It would look like his face was, at best, a star and at worst, a pretty flower. Still, Andrew Garfield managed to pull off a spandex suit, so anything’s possible. 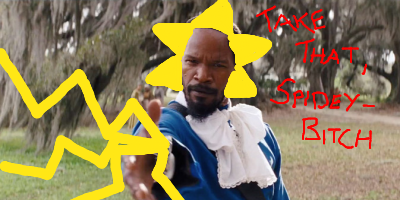 What’s sad about using Electro in The Amazing Spider-Man sequel is that he fits nicely into Marvel’s other major franchises: he stole lots of stuff from Stark Industries and Magneto tried to recruit him as a member of the Brotherhood of Not Very Nice Freaks. It would have been a rather nice tie in. Don’t even get us started on how Spider-Man would have been in The Avengers if Sony had given up the rights.

Jamie Foxx is a rather hit-or-miss actor. Although the up-and-coming Django Unchained looks fantastic, his only other lauded role was in Ray (for which he won the Oscar for Best Actor). Some of his more confusing appearances have been in Horrible Bosses, Valentine’s Day and Stealth (why Jamie Foxx, why!?) If he does accept the role of Electro, let’s hope it’s one of his better films.

Fancy a little Jamie Foxx in your Spider-Man? How can Electro possibly fit into the film with all the teenage angst around?