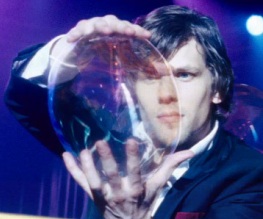 Jesse Eisenberg stars as a cocky illusionist in our first glimpse of magic-based thriller Now You See Me. Along with fellow conjurers Woody Harrelson, Isla Fisher and Dave Franco, the do-gooding band of tricksters use their blockbusting show to redistribute a little wealth amongst their audience via a series of bafflingly staged bank jobs. It’s not long before the FBI (represented by Mark Ruffalo, of course) gets wind and wants to know a few secrets of the trade.

It looks like a strange brew, equal parts Prestige and Ocean’s, with some slick action clicking away at the edges. Transporter and Unleashed director Louis Leterrier is a confident hand, so we’re expecting nothing less than a final scene switcheroo from Jesse Eisenberg and his merry men (and Isla Fisher). We’ll not dwell for too long on the posse’s motivation for the compensation. Telling a sold-out Vegas audience that the heist is in aid of all their lost houses and cars during the recession is worth a snicker, but it’s probably best not to jump the gun. With such a slippery subject, we’re cautious of being utterly duped along the way.

Jesse Eisenberg has always had a brash confidence about him, and for once it doesn’t look like misguided hubris. Now You See Me looks promising, plus Michael Caine and Morgan Freeman are in it! Both seem to be prospering after life at Wayne Enterprises, the latter even blessing the trailer with a voice-over of familiar authority. Who better to provide a bit of misdirection, after all?