John Cusack and Nicolas Cage in talks for The Frozen Ground 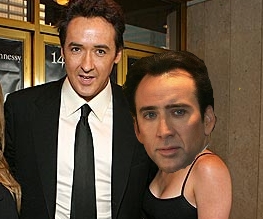 John Cusack and Nicolas Cage are in talks to team up for the first time since Con Air (alright, so Cusack was in Adaptation for like a minute) for first-time director Scott Walker’s The Frozen Ground.

The film will focus on the true story of Robert Hansen, an Alaskan serial killer who would kidnap women, before letting them loose in the forest and hunting them down. Hansen was at large for over 12 years, in that time kidnapping 24 women. We were actually a little surprised to learn that it was Cusack, rather than Cage, who’s up for this role, as Cage already has experience in violent misogyny from his performance in The Wicker Man. However, it will be interesting to see Cusack stretching himself in a different role.

Cage will play an Alaskan State Trooper who finds Hansen’s only survivor on the streets, working with her and her family to help track Hansen down and bring him to justice. Expect a big Cage-Cusack stand-off at the film’s climax.