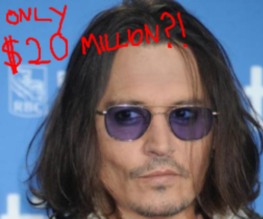 Johnny Depp is set to star in Oscar-winning cinematographer Wally Pfister‘s directorial debut; sci-fi film Transcendence. Despite having one of the most unfortunate names in Hollywood, Pfister was a key member of the team behind Inception, the Dark Knight trilogy, and The Prestige, alongside Christopher Nolan, who is on board to executive produce Transcendence. Pfister appears to have picked up some publicity tips from the famously secretive Nolan and has so far refused to give any more information about his Depp-studded project. Until now….

Plot details have been revealed that confirm Johnny Depp’s appearance as scientist Will, who is working with wife, Evelyn, and friend, Max, on developing artificial intelligence. However, speculation reigns over how Depp’s brain apparently manages to worm its way into a supercomputer. A current summary, subject to change, has it that Johnny Depp’s Will is assassinated by anti-technology terrorists (is that a thing?), so his wife uploads his brain into a supercomputer. Other suggestions are floating around that the computer develops malevolent awareness of its own accord and sucks in Depp’s character’s brain with some advanced hoover device. Johnny Depp’s contract is contingent on changes being made to Jack Paglen‘s screenplay, so who knows what could happen! Our main worry is, as a computer, how will Depp manage to raise his eyebrows or flail his hands? YOU’VE TAKEN AWAY EVERYTHING THAT’S GOOD ABOUT YOU, JOHNNY DEPP!

Paglen’s plot is said to focus on “singularity, nanotechonology and artificial intelligence”; technological singularity being the theory loosely lurking behind the Terminator franchise that it is possible for technology to acquire intelligence greater than that of a human. Apparently, this would lead to an “intelligence explosion” (sexy), where the technology would be taking in information at a pace impossible for humans to keep up with. Good job Pfister thinks Johnny Depp is “a creative and intelligent artist whom I feel will bring great depth to the character and the overall narrative.” He’s practically super already.

With Johnny Depp on board, eyes are on who else Pfister might nail for the roles of Evelyn and Max. Apparently Ewan McGregor passed on the project and lovely Tom Hardy is unfortunately not available, but both Tobey Macguire and James McAvoy are being considered – presuming McAvoy manages to successfully extract himself from under the car-crash-in-waiting that is Welcome to the Punch.

Who would you like to see challenging Johnny Depp’s supercomputer for screen time?

Previous: The Hobbit gets one last (we hope) clip before general release
Next: 12 Days of Christmas #1 – BFF’s Top 1 Partridge