Justin Timberlake in In Time 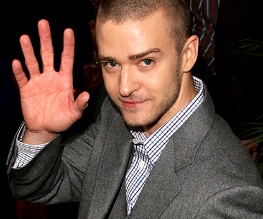 Oh we all love Justin Timberlake, and that is the reason why we will go and see In Time, a crazily confusing film with a plot as follows (we’re going to try and spell it out simply here):

In the future, the ageing gene has been stopped so no-one ages over twenty-five, to avoid overpopulation or something. Somehow time becomes a currency and people can work to buy more of it – the rich can live forever and the poor have to keep working just to not die. JT is playing a young poor man who comes into a lot of time and therefore is being chased up by corrupt policemen (or ‘time-keepers’) who we assume want to steal it.

It’s a plot so dastardly complicated that it might just be genius. Here’s the (equally as odd) poster: Directed by Andrew Niccol (hmm.. director of Lord of War? Co-writer of The Terminal?) it’s rumoured to be due for release this October, but nothing confirmed as yet. If you want some slightly simpler Justin-based watching, why not pencil in Friends With Benefits for 9th September?