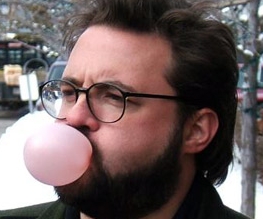 Pioneer of indie cinema and raconteur Kevin Smith has thrown us journos another curve-ball, by banning any press from seeing previews of his first foray into the horror genre, Red State…Well, kind of, but not really. In actual fact, what Smith has decided to do is pretty cool, and perfectly in keeping with his indie sensibilities…and maybe a reaction to the terrible reviews he received for his last movie, the only one he didn’t pen himself, Cop Out.

As is the norm nowadays, Smith tweeted his new screening strategy to his million-or-so followers, basically saying that if critics want to see any of his films in advance then they’ll have to ruddy well pay for it, going on to say that the free preview tickets will instead go to 500 of his UK fans. Are we outraged? Are we balls.

Going to the flicks has become a real expense in recent years, especially with the advent of 3D, and so we think it’s incredibly refreshing that Smith is rewarding the people who keep him in the movie business: his fans. If this is indeed to be his penultimate film, before he signs off with his hockey flick Hit Somebody, then he’s not going quietly. We here at Best For Film will most certainly be ponying up the dough and heading down to Red State, as if the trailer is anything to go by, it looks like it could be his most interesting film yet. Here’s another look at the trailer, just to whet your appetite.

Previous: Johnny Depp close to a deal for Pirates 5
Next: Top 10 Films we Hate to Love… and Love to Hate