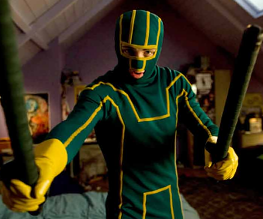 So, it’s been nearly two years since Mark Miller cheerfully promised us that Kick-Ass 2 was on the way, and though it’s not like we’re actively calling him a massive liar, two years is just a really long time and stuff Mark, you massive liar. Anyway, it’s looking a bit like things might FINALLY be moving for the much-awaited sequel. Though Matthew Vaughn and Jane Goldman are too busy being all important in the X-Men: First Class universe to climb aboard writing and directing duties, WHICH IS SAD.

So who exactly IS heading up the project, we hear you screech as one. Well, it appears that Universal enlisted Jeff Wadlow, (of Cry Wolf fame) to take over scripting fun, and having handed over a draft that both creator Miller and Vaughn himself approve of, it may well be that he’s going to be directing it too. Of course, we can only assume that the sequel will be based on the next installment in the comic books series: Kick-Ass 2: Balls To The Wall, which sees our heroes Kick-Ass and Hit Girl going up against Red Mist and his minions. Aaron Johnson, Chloe Moretz and Christopher Mintz-Plasse are all currently in talks with Universal as to their availability, and we can only hope that the three stars all retain loyalty to the project that made them universally loved. Moretz in particular has a lot on her plate at the moment balancing Carrie , The Drummer and promotional duties for Dark Shadows and Hick – but surely she won’t be able to resist the opportunity to kill everyone forever all over again? Surely?

WHY AREN’T GOLDMAN AND VAUGHN COMING BACK? MOURN WITH US BELOW