King Kong Is A Killer At Auction 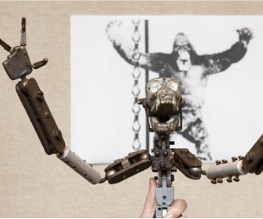 How much would you pay for 22-inch furless and motionless King Kong model? If your answer is “less than £120,000” we’re afraid you would have walked away empty handed at auction.

That’s right, in an auction house in South Kensington, London, a model of Kong used in the classic 1933 film was sold for a grand total of £121, 250. The bidder was anonymous, and to be honest, we’re not surprised. The longer he can hide that purchase from his missus, the better.

Of course, the little metalic fella is a pretty amazing piece of cinematic history. This is the model that was used to create the epic ‘Kong on Empire State Building’ climax, and was filmed using cutting edge stop motion animation. It’s not just a creepy looking monkey skeleton man, basically you’re buying a legend. Just think of the possibilities open to its new owner! He can, you know, look at it, and well… put bits of fake fur on it and make gorilla noises, not to mention use it as a human shield when that ‘buying a legend’ stuff doesn’t fool her for a second.