Lawless gets a brand-new trailer! 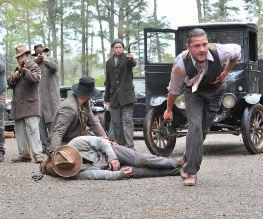 Lawless has DEFINIELY lived up to its name in the brand-new trailer; it’s got everything any wannabe cowboy could want. Think bare breasts, excessive amounts of alcohol, dusty landscapes, plenty of violence, extreme prejudice, a helluva lotta guns and a handful of explosions.

There’s even some horses running about in a field as well.

The new trailer opens up with the disturbing image of a bootlegger – or ‘former bootlegger’ – who has been subjected to the punishment of a tarring and feathering. Although, looking at the victim closely, it seems as if those in charge of the punishment took things one step further with a lighted match. Ouch.

And things only gets darker from there…

Yee-ha! From a good old-fashioned hoe-down to Tom Hardy whipping his shirt off, there’s something there for everyone to enjoy, isn’t there?

The film is based on the true events surrounding the Bondurant brothers; the duo were famed for bootlegging moonshine in Viginia, smack bang in the middle of the Prohibition. And, judging by Guy Pearce’s angry little face, the lawman isn’t too happy about that. The plot follows the events dictated in ‘The Wettest Country In The World’, a historical novel famed for being “extremely graphic, with multiple descriptions of physical injury, brutality and sadistic behavior.

We guess, judging from THAT review and the new trailer, viewers of a sensitive disposition may wish to take a rain check on Lawless when it hits cinemas later this year…

Previous: Despicable Me minions spin-off set for December 2014
Next: Diaries out! The Golden Globes is set for January 13, 2013