Liam Neeson is a badass in new images from Taken 2 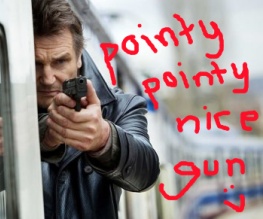 Oh Liam Neeson, him and his lovely Irish ways/indefatigable thirst for bloody vengeance. Remember when he kept hanging out with that weird shrimp boy in Love Actually? “Let’s go get the shit kicked out of us by love!” and all those terrible bits? We remember those scenes because they made us want to never love anything ever again. Well Liam is officially trying to punch those memories out of all our stupid heads by starring in all the action films forever from now on.

Following on from the success of 2009’s Taken, in which Liam’s daughter was kidnapped by Albanians, forced into prostitution etc., comes a sequel (out on October 5th) in which – GET THIS – the kidnappee this time around is LIAM HIMSELF. Or whatever his character is called. Jack Hardman or Vince Gunbrandisher or something.

Anyways, here are some photos (courtesy of Entertainment Weekly) from the film. We’re really quite taken with them. This first one, for instance, shows Vince on a train, pointing a gun at something that we can’t see. It could be anything. An Albanian, the physical embodiment of Evil, a wolf. Tune in to find out! And here’s Vince giving someone a nice hug. That must feel wonderful for both parties. Finally, here he is watching a Catherine wheel. Delightful! So what do you think of these photos? Do they excite and arouse you? Let us know below!