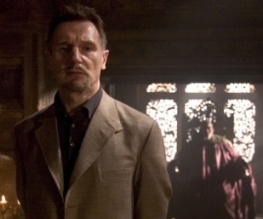 The nerdtacular Internet rumour mill has gone into frantic, speccy overdrive at the news that Liam Neeson was spotted on the set of Batman threequel The Dark Knight Rises this week. OMGROFLMAO!

Neeson, whose character Ra’s al Ghul appeared to die at the climax of Batman Begins, has not been officially confirmed as a cast member (damn you, Christopher Nolan, and your information drip-feeding!), but it’s a fair bet that he’ll be reprising his role from the 2005 film in the series’ hotly anticipated conclusion.

Interestingly, however, Josh Pence has already been cast as ‘Young Ra’s al Ghul’. We had previously assumed that this meant there would be plenty of flashback fodder in the offing, but now we’ve got a new theory. As you’ll know (we’re all nerds here, right?), in the Batman comics Ra’s al Ghul grants himself unnatural longevity and youthfulness through the periodic use of Lazarus Pits, extraordinary natural phenomena which can restore even the most aged and battered body to full vitality.

The last we saw of Ra’s was as the monorail he’d sabotaged crashed into the base of Wayne Tower, and it seemed a safe bet to write him off – however, what if the remaining members of the League of Shadows managed to get him into a lovely restorative bath of Lazarus goop? It doesn’t quite gel with Nolan’s aggressively realistic take on the Batman canon, but anything’s possible…

How do you think Liam Neeson is being shoehorned back into The Dark Knight Rises? Let us know below!