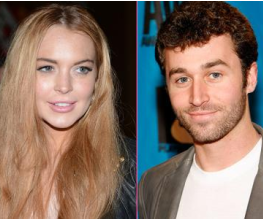 There is a very obvious attempt to mimic an authentic grindhouse-style aesthetic with the campy subtitles and filtered sepia-toned lighting, but the whole thing just comes off a little cheap. The few scenes that show Lindsay Lohan in action feel very forced and wooden and despite his pretty boy-next-door looks we’re not entirely convinced that James Deen’s casting is anything more than a publicity stunt.

Having watched the trailer a few times now, we cant say that The Canyons looks as if it has the potential to serve as an effective come-back vehicle for Lindsay Lohan’s dying career. Admittedly, there is very little revealed about the plot and there’s every possibility we might end up eating our words, but we’re starting to wonder if Lindsay Lohan will ever get ‘it’ back? It feels like forever since we’ve seen her display anything vaguely resembling true talent, and with her entire public image sullied by her various legal disputes, we wonder if now might just be time for Lindsay Lohan to …well…give up?

Previous: Armie Hammer might play Batman in Justice League
Next: WIN a signed Ill Manors script with It’s a (w)Rap!