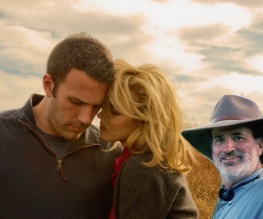 Visionary director, mysterious hermit and hat-wearer extraordinaire Terrence Malick is planning to shoot two films back to back in 2012. Malick is famous for the long gaps between his projects, the most significant being the twenty years that passed between turn of the century romantic drama Days of Heaven and World War Two epic The Thin Red Line.

Malick has already wrapped filming on one project – potentially named The Burial and starring Ben Affleck and Rachel McAdams. But Hollywood Reporter has managed to get the scoop on the remaining two projects.

The first, titled Lawless, will star man of the moment Ryan Gosling alongside Cate Blanchett, Christian Bale, Rooney Mara and Haley Bennett (of Music and Lyrics fame duh). The second film, Knight of Cups, will also – curiously – star Blanchett and Bale, but there is no word as of yet on whether the two films are linked in a significant way.

So what’s with all the films all of a sudden, Malick? What do you know that we don’t? Is the world ending or something?? WHAT ARE YOU PLANNING??? In all seriousness, we are very excited.