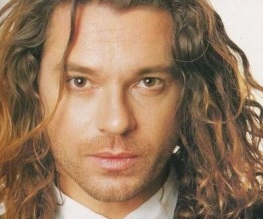 Michael Hutchence, the Australian singer who famously died in a hotel room in 1997, is – according to the folks over at Deadline – the subject of not one but TWO new biopics.

One, titled Two Worlds Colliding and written by Robert Galinsky, is based on the book Just A Man – The Real Michael Hutchence while the other – simply Michael – is being directed by Richard Lowenstein, who previously worked with Michael Hutchence on the film Dogs In Space. Aside from Dogs In Space sounding like it could be our favourite film ever, we’re not exactly sure what our thoughts are on this.

The story of Michael Hutchence’s life will no doubt be crammed with drama – drugs, romance (he had a daughter with Bob Geldof’s ex wife Paula Yates), fame, the mystery surrounding his death – but somehow we’re not sure it warrants two whole films. Sue Murray, the producer behind Michael, has remained quiet about her own project but said of Two Worlds Colliding, “Our project is in late development, so we are further ahead than Bobby Galinsky’s project. Richard’s is an original screenplay based on his friendship and work with Michael and INXS, and extensive research and interviews that include talking with Michael’s siblings.”

Cool, we guess? These could be good. Does the world need them? Not really. Does the world want them? Perhaps. Did the makers of Michael consider the fact that there’s already a film called Michael that’s about John Travolta as an angel? Most likely. Is this whole thing just another example of Hollywood exploiting people’s tragic lives for cold, hard, delicious cash? Yes, almost definitely. But there you are.

The people want Michael Hutchence biopics and they want them now goddamnit!