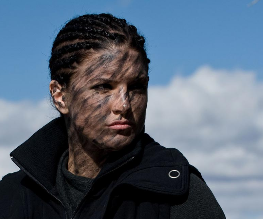 January is a generally pretty dull month, film-wise. Everyone’s poor, everyone’s a bit depressed, no-one can really be bothered, and we’ve still got December’s block-busters waving at us half-heartedly from the sidelines. All in all, it’s fair to suspect that a star-packed action thriller like Haywire might slip under the radar. And that would be a shame. Cos it’s starting to look like proper good fun.

Starring world-champion fighter Gina Carano, Haywire looks like your basic “betrayed secret agent why so betrayed why so secret” romp, but STARRING WORLD-CHAMPION FIGHTER GINA CARANO. So it’s going to approx 78% more kick-ass than Jolie’s Salt ever was. Which was still quite kick-ass. It’s also got Michael Fassbender in it, and the two of them get into a big fight. Oh it’s going to be great, have a little look at the second trailer: