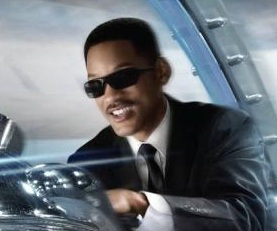 With less than a month to go until the release of Men in Black 3, it’s time for another vaguely interesting scrap of promotional material to keep us interested. And what could be more exciting than a monowheel, similar to the ones which have been turning up across sci-fi (and, actually, in real life) for decades? General Grievous had a monowheel, for God’s sake, and when something turns up in the Star Wars prequels it can officially never be cool again.

Anyway, here it it. Look at Will Smith going fast! Ooh. Click to make it MASSIVE: Alright, it’s blue and silver like the Noisy Cricket or whatever, and Will Smith does as usual make this shit look good, but seriously… is there any difference between that and this? We’ll tell you the difference – Monochromewheel boy there is wearing a hat, because he’s a stone cold legend. Move over, Will, there’s a new gyroscopically-balanced kid on the block.