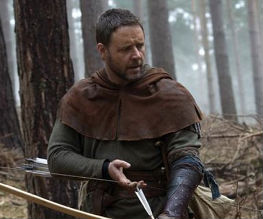 The Ridley Scott Robin Hood movie is coming at us faster than a speeding arrow – it’s less than a month away, people! As if you weren’t excited enough, three new clips from the swashbuckling, Nottingham-based epic have been posted on this thing they call the internet!

The first clip shows Russell Crow using his wily charms on Cate Blanchett’s Lady Marian. Those are meant to be Nottingham accents (in case you were wondering).

The next clip is of Robin kicking some French ass, in an example of the awesome Ridley Scott battles we can hopefully expect to see a lot more of in this film.

Finally we have some Merry Men action going down, complete with a crossbow-wielding Friar Tuck, as Robin’s men ambush some bad dudes in the forest.

Robin Hood comes out on May 14th.

Have these clips got you excited for the Russell Crow Robin Hood? Let us know below!

Previous: Friday 13th 2 Is Killed Off
Next: Monsters inc part 2