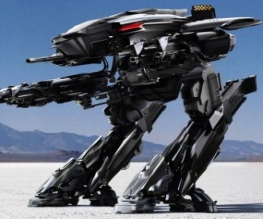 A new teaser has been released for the remake of RoboCop, due for a 2013 release. You should know before you press play on what will at first appear to be a documentary on the impact of the London riots on Foot Locker, that it is something Don Draper would have poured his elevenses gin all over in disgust.

One thing that was always pretty special about the original RoboCop was how well it fit into what was going on in the public consciousness of the time; produced in 1987, in the wake of the financial disparity, soaring crime rates and bloodshed of the Cold War, R-rated violence covering up a sharply satirical core was exactly what cinema audiences were looking for in their sci-fi fantasies. In 2013’s reboot, the faux-ad teaser takes Mad Men meta, in that self-important way of promoting things we often have nowadays (see the relentless Dark Knight Rises campaign), and marks itself out as possibly being a little more present in our world than other sci-fi fare; great if you’re the sort of dick who can’t just shut the fuck up and enjoy some explosions, robots and scantily clad damsels-in-distress without clever-vomming over all your friends about it afterwards.