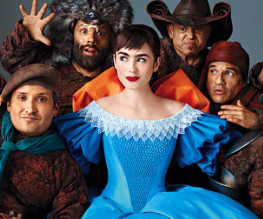 Remember a couple of months back we posted the first trailer for Mirror Mirror, accompanied by lots of shouting about how dreadful it was? Well guess what? THERE’S ANOTHER ONE! And it’s marginally less bad.

This year it looked like it was going to be battle of the pasty-faced maidens as the Kristen Stewart led Snow White And The Huntsman squared off against Julia Roberts’ Mirror Mirror. However, having watched trailers for both, it’s clear they’re going for very different audiences. Snow White And The Huntsman is for grownups. Mirror Mirror is for people who never get tired of Nathan Lane doing a shocked face.

Take a look at the new trailer. Honestly, it’s not as bad as you think it’s going to be:

At least “Snow white? Snow way!” has been axed this time around. To be fair, from this trailer it would be perfectly fair to say this looks like a jovial, colourful family flick that doesn’t seem to take itself too seriously- sword-fights, silly costumes and Armie Hammer being a dog for some reason. Why isn’t this the only trailer, Mirror Mirror? Why isn’t that what happened?

Previous: J. Edgar
Next: Terminator 5 to be rated R