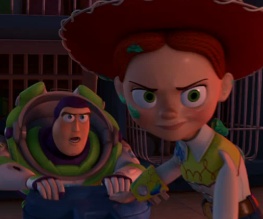 We’ve just got wind of this: The new international Toy Story 3 trailer. Despite the fact that the first half of it is taken up with some sort of half-baked memory-jogging clip show (who needs reminding of Woody and Buzz? Seriously!) the rest of it gives us a pretty good idea as to what we’re looking forward to in the much-anticipated third installment.

All the regulars look to be back – it just wouldn’t be the same without Tim Allen’s Buzz and Tom Hanks’ Woody, and it’s good to see John Ratzenberger and Don Rickles back as Hamm and Mr. Potato Head respectively. From what we can gather from the trailer, the story sees long-standing owner Andy off to University, leaving the toys to be donated to a local day care centre. Fearing the drool, nasal insertions and general abuse they’ll suffer from a bunch of pre-schoolers, Woody and the gang decide they’ve gotta get out. I’d like to point out to Pixar that with this kind of set up, it’s actually illegal if you don’t do a Great Escape gag.

The movie should be with us June next year. Enjoy the build up now before it all gets silly – which it invariably will. But who cares? With this to look forward, I guess we can forgive ourselves for getting a little bit Toy Story crazy.