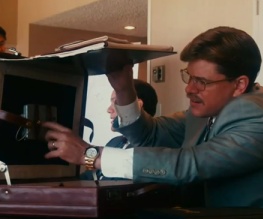 It’s an irony that can’t have been lost on Steven Soderburgh. Matt Damon – tiny-faced, neckless mannequin that he is – goes from playing sociopathic amnesiac Jason Bourne to the chubby, toupéed middle-manager-turned-spy Mark Whitacre in the space of only a couple of films. Whether Damon’s reputation for playing memory-challenged ex-CIA assassins had any bearing on his casting in Sonderburgh’s latest is unclear, though it’s clear (to us at least) that the jocular exclamation mark of The Informant! is mainly there to stop people asking for their money back when they didn’t get to see Bourne 4: The Bourne Yesterday.

Bourne in the USA

Yet even if there was someone dumb enough to mix The Informant up with something a bit more Bond-based, chances are they wouldn’t leave the cinema feeling ripped off. Vaguely ridiculous and ashamed, sure – but not ripped off. And that isn’t because there’s any inherent similarities between The Informant and any other (slightly more po-faced) spy drama. It’s just that The Informant! is a damn entertaining movie.

Damon’s Whitacre is a successful businessman, rising up the ranks of cereals conglomerate Archer Daniels Midlands. While assisting FBI agent Brian Shepard (Quantum Leap‘s Scott Bakula) in uncovering a bit of corporate espionage, Whitacre casually confesses that he and numerous other company directors have been participating in a scam to fix the price of an animal feed additive. He then readily agrees to help the FBI gather intel on the cartel to ensure a prosecution – only Whitacre is no Bond. He isn’t even a Bourne. But that doesn’t stop him thinking he’s the newest, most dashing secret agent on the scene.

Bourne with a silver spoon in his mouth

Which, naturally, he isn’t, and this is the mainspring of much of the comedy in The Informant!, but not necessarily from pratfalls or cliché-busting winks to the audience on the cinematic representation of spies. No, The Informant! is funny for two very good reasons – a great script by Scott Z. Burns and a superb performance by Damon. It’s a shame that for the last five years or so Damon seems to have taken on nothing but serious roles (Bourne, The Departed, The Good Shepherd, etc.) because the man’s really got talent when it comes to comedy, and specifically character comedy. Whitacre is well observed, alive and believable; his descent into a web of lies, and his increasingly unreliable narration, only serve to make him more compelling, if not exactly likable.

Bourne Aloft On… d’ya know what? Screw it.

While this probably isn’t Sonderburgh’s best (we can’t decide between Kafka and Che on that one), The Informant! is certainly up there alongside his finer works, and is a definite step-up from the last two Ocean movies. It’s low-key, wry, witty and just a little bit cynical – just the way we like it, really. If there was one criticism we had to make, we’d draw attention to Marvin Hamlisch’s rather distracting score, which feels sorely out of place and often intrusive. Besides that, those who like their comedy smart with a slight Coen Bros. flavour to it, The Informant! comes highly recommended.