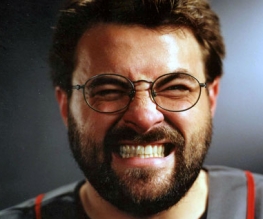 Like a cruel teenager dangling delicious cakes in front of a fat child’s face, Kevin Smith keeps teasing us with promos for his upcoming horror flick Red State. The latest trailer showcases more of what promises to be a brilliant performance from Michael Parks, as well as allowing us to see more of Oscar winner Melissa Leo and the always wonderful John Goodman.

Here it is – but be prepared. This is no Clerks, and there’s nary a hockey stick to be seen…

Smith has already caused a stir with this film by choosing to market it in an innovative, cost-efficient way, not spending any money on advertising and instead making use of his considerable social network to spread the word. This is even alluded to in the trailer with his Twitter moniker @ThatKevinSmith given instead of his name. Also, instead of striking a traditional distribution deal too, he has taken the film on a nationwide tour of the USA, and will release it in cinemas for one night only in October, as well as a video-on-demand release on September 1st.

The profanity-laden, naturalistic dialogue is what we’ve come to expect from Smith, but it does seem that visually he’s really stretching himself. Simply put, this looks like nothing he’s done in the past, and if this is indeed to be his penultimate film, finishing up with his passion project Hit Somebody, well then it looks like he’ll be going out on a high.