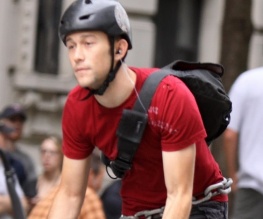 Remember that movie Drive that everyone is so excited about? The one where Ryan Gosling has to drive people places, and then somehow gets involved in a crime conspiracy that is way over his head? Yeah, well Premium Rush is kind of like that. Except instead of Ryan Gosling, we have Joseph Gordon-Levitt. Fittingly, while Gosling drives a restored 1973 Chevy Malibu, Gordon-Levitt rides a bicycle.

Premium Rush follows Wilee, a New York bike messenger who becomes an unwilling accomplice in a scheme orchestrated by a crooked cop (Michael Shannon). While the plot and trailer don’t look too inviting (lots of numbers flashing up on screen, lots of improbable bike tricks) it does come from writer/director David Koepp. With screenplays such as Jurassic Park, Mission Impossible and Death Becomes Her behind him, it’s fair to assume that ‘fun-filled caper’ is this guy’s middle name. After this Koepp will move onto Men in Black III, so at the very least Premium Rush should be the litmus test for Koepp’s current skill set.

Has this trailer convinced you that cycling is indeed badass?