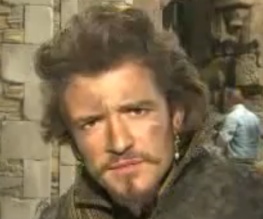 We’ve just watched some footage from the set of the almost-certainly-going-to-be-shit Three Musketeers reboot, due out this year with Luke Evans, Ray Stevenson and Matthew MacFadyen in the title roles. Orlando Bloom’s set to appear as the Duke of Buckingham (Prime Minister of England, illicit lover of French queen Anne of Austria and general all-round LAD), but it looks like he’s channelling more than a little Jack Sparrow for his performance.

Let’s not beat around the bush, the man has clearly lost it. Unless he’s going seriously method on this (unlikely), his overflowing Depp-envy from Extras has taken hold of his personality in no uncertain terms – when he’s not smashing boxes in a burning building, he’s shrieking at an unseen presence called ‘Francesca’. Nobody in the real world is called Francesca. We know this. After years of relentlessly mediocre performances, the poor fellow’s cracked.

Incidentally, who on earth wrote a Duke of Buckingham who’s “like a petulant child”? That’s Porthos’ job! And whose bloody idea was it for his big entrance to be in an AIRSHIP? We try not to be too pedantic at Best For Film, but The Three Musketeers begins in 1625, almost 250 years before powered airships were beginning to become a realistic proposition. This is all very silly and we want it to stop now, please.

Previous: Will Ricky Gervais present the Globes for a third year?
Next: WIN: 3 x THE MORGANA SHOW boxset DVDs!