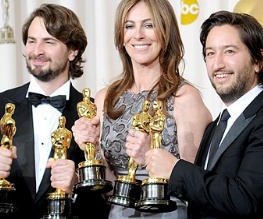 God bless nail-biting competition. This year Oscar viewing figures have been the best in 5 years, with almost 41 million people in the US tuning in.

This, of course, was mainly down to the battle of the titans that was Avatar vs The Hurt Locker, and the story was made all the juicer by the fact that the two directors used to be married. Of course, in the end Avatar walked away with just 3 awards, and The Hurt Locker stole the evening by winning Best Picture and Best Director. But considering the viewing figures for the Oscars have been flagging over the last few years, it just goes to show that a little competition is all we really crave.

Were you one of the millions who tuned in on Sunday evening? Let us know below!

Previous: Ondine
Next: Who Will Be Captain America?