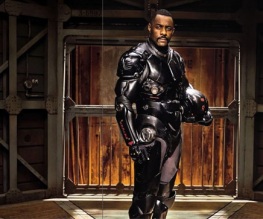 Pacific Rim has, for such an epic monster movie, been kept remarkably quiet. Only recently were we finally granted a peek at some tantalising viral propaganda. Aside from that mysterious information dump, things have been mighty quiet around the ol’ Pacific Rim. Until now. Merely laying in wait, this initial trailer for Guillermo del Toro‘s latest is a behemoth of destruction.

TASTE THE ANNIHILATION! Maybe the Mayans miscalculated, because Earth is in for one hell of a battering next year. This past week we’ve seen apocalyptic visions in new trailers for Man of Steel and After Earth, and now Pacific Rim‘s horrific Kaiju are rising from the depths of the ocean to wreak havoc on our tiny planet! One thing they didn’t count on, though: IDRIS ELBA IS CANCELLING THE APOCALYPSE. That’s right. You heard him. Take off your make-up and stick the kettle on, because giant robonic Jaegers (human-powered Megazord-type Kaiju-dispatchers) are going to kick the living shit out of these prehistoric monsters.

Also, GLaDOS from Portal is in it! Yaysies!

Previous: The Wolverine gets a fancy motion poster. It’s a beauty!
Next: Chad Michael Murray resurfaces in The Haunting of Connecticut 2 trailer